Croatia Votes for Sovereignty and Confederation 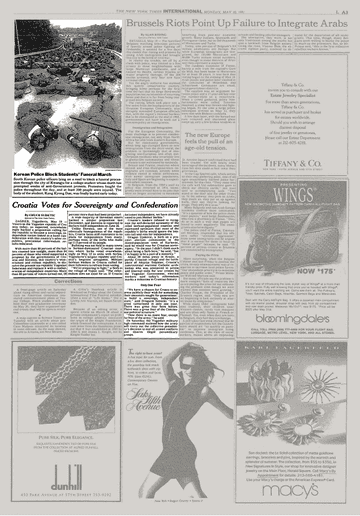 Credit...The New York Times ArchivesSee the article in its original context from May 20, 1991,Section A, Page3 Buy Reprints View on timesmachine TimesMachine is an exclusive benefit for home delivery and digital subscribers.About the ArchiveThis is a digitized version of an article from The Times’s print archive, before the start of online publication in 1996. To preserve these articles as they originally appeared, The Times does not alter, edit or update them.Occasionally the digitization process introduces transcription errors or other problems; we are continuing to work to improve these archived versions.

Voters in the Yugoslav republic of Croatia today, as expected, overwhelmingly backed a proposition calling for the republic to become a sovereign, independent nation linked in a loose confederation with this country's other republics, provisional referendum results indicated.

With more than 80 percent of the ballots counted late tonight, more than 94 percent of those who voted supported a proposal by the governments of Croatia and Slovenia, this country's westernmost and richest republics, to dissolve the present six-republic Yugoslav federation and replace it with a confederation of independent countries. More than 86 percent of voters turned out, 10 percent more than had been projected.

A wide majority of Slovenian voters backed a similar proposition last December, and Slovenia is expected to declare itself independent on June 26.

Unlike Slovenia, one of the most ethnically homogeneous of the republics, Croatia faces stiff resistance to its plans for independence from many, perhaps most, of the Serbs who make up 11.5 percent of its people.

Balloting was not held in many towns in Serbian-dominated Croatian counties where Serbs voted overwhelmingly on May 12 to unite with Serbia, Yugoslavia's largest republic and Croatia's longtime antagonist. Militant Serbian leaders in Croatia called for their followers to refrain from voting.

"We're preparing to fight," a Serb in the village of Vojnic said. "The referendum does not exist for us. If Croatia becomes independent, we have already voted to join Mother Serbia."

Croatia's leaders refused to recognize the self-declared autonomy of the rebel Serbian-populated counties and expressed optimism that most of the republic's Serbs would ignore the boycott call and vote for independence.

Dragan Djakovic, a Serb on a precinct election commission in the mixed-population town of Karlovac, said he would vote for Croatian sovereignty. "In the past I didn't think much about being a Serb here," he said, "but I'm happy to be a part of a minority."

About 20 miles away in Krasic, a purely Croatian village and the birthplace of Alojzija Stepinac, Croatia's controversial wartime Catholic archbishop who was sentenced to prison and internal exile for war crimes by the Yugoslav Government, election workers said today's referendum marks a milestone in Croatian history. Only One Fear

"We have a chance for Croats to express publicly their wish for something their ancestors sought for generations: to build a sovereign, independent state," said Dragutin Simecki. "It's a great turnaround in only one year. There was great fear here before. There was a great fear of the Communist political structure."

"Now there is no more fear, except for fear of the army," he said.

On Saturday, the Yugoslav military high command outlined how the army will carry out the collective presidency's decision to end all armed conflicts and disarm illegal paramilitary groups.