Grammys to McFerrin and Chapman 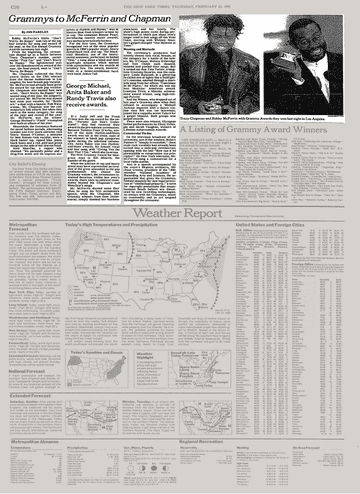 Credit...The New York Times ArchivesSee the article in its original context from February 23, 1989,Section C, Page20 Buy Reprints View on timesmachine TimesMachine is an exclusive benefit for home delivery and digital subscribers.About the ArchiveThis is a digitized version of an article from The Times’s print archive, before the start of online publication in 1996. To preserve these articles as they originally appeared, The Times does not alter, edit or update them.Occasionally the digitization process introduces transcription errors or other problems; we are continuing to work to improve these archived versions.

Bobby McFerrin's blithe ''Don't Worry, Be Happy'' took two of the top four awards, for song and record of the year, at the 31st annual Grammy Awards ceremony last night.

From the beginning, the ceremonies shaped up as a battle between Tracy Chapman's somber, social-realist ''Fast Car'' and ''Don't Worry Be Happy.'' The lighthearted won over the downhearted as record of the year, the final award, went to ''Don't Worry, Be Happy.''

Ms. Chapman collected the first award shown on the CBS telecast from the Shrine Auditorium in Los Angeles, for best female pop vocalist; Mr. McFerrin had already been given the award for top male pop vocalist. Ms. Chapman was named best new artist; ''Don't Worry, Be Happy'' was named song of the year, the songwriters' award. Mr. McFerrin was named best male jazz vocalist, for ''Brothers,'' a duet with a bassist, Rob Wasserman; Ms. Chapman won the contemporary folk award. But when they were in the same category, for song of the year and record of the year, Mr. McFerrin was the winner. George Michael's ''Faith'' triumphed over both as album of the year. From Tuxedos to Torn Jeans

Meanwhile, the Grammys featured the usual fashion parade, alternating tuxedos and ever more extreme rock finery. Sinead O'Connor, a nominee for best female rock vocalist, wore a black halter top, ripped blue jeans, black boots and a red, gold and green design on the side of her shaven head.

Kool Moe-Dee, a rapper who chanted ''We personify power and a drug-free mind, and we express ourselves in rhythm and rhyme,'' was in electric blue from trousers to bow tie to cap. The comedian Minnie Pearl, introducing country music awards, was uncharacteristically hatless.

For the first time, the Grammys recognized two of the most popular genres in 1980's popular music, heavy metal-hard rock and rap. The black-clad Metallica, one of the heavy-metal nominees, performed its ballad ''One,'' a song about a blind and deaf quadruple amputee, which opened with pyrotechnics and the sounds of artillery fire. The award, however, went to a better-established hard-rock band, Jethro Tull.

D. J. Jazzy Jeff and the Fresh Prince won the rap award for the single, ''Parents Just Don't Understand''; they had received their award in the pre-telecast ceremonies. Because Terence Trent D'Arby, winner of the male rhythm-and-blues award, was not at the event, none of the winners in black pop categories spoke during the televised ceremonies. Anita Baker won two rhythm-and-blues awards, for female vocal and best song, with ''Giving You the Best That I Got,'' which she co-wrote.

The first Grammy Award for bluegrass went to Bill Monroe, the founder of the genre. Rap and Heavy Metal

While the addition of rap and heavy metal may have represented an invasion of the great unwashed to the pop professionals who choose the Grammy winners, the ceremonies remained decorous. Unlike last year's awards, there were no political statements beyond Ms. Chapman's and Metallica's songs, and no flamboyant outbursts onstage, although Alice Cooper, introducing the heavy-metal award, tossed around a toy snake.

Mr. McFerrin showed some flair when he sang his first acceptance speech, while Ms. Chapman, like Grammy winners from time immemorial, simply thanked her business associates and her family. The show's high points came during performances in which just about every singer tried to belt songs off the West Coast, starting with Whitney Houston's gospel-charged ''One Moment in Time.'' Moaning and Mariachi

The ceremony's producers had cannily chosen rock vocal, female, as the category for a battle of the belters. Ms. O'Connor, Melissa Etheridge and Toni Childs each shouted, moaned and yowled their songs. But it turned out that Tina Turner, a longtime Grammy favorite, won the category. Linda Ronstadt, in a glittering so-called suit of lights like a bullfighter's costume, emoted through a mariachi song from her album ''Canciones de Mi Padre,'' for which she won the best Mexican/ American award. Leontyne Price, a lifetime achievement award winner, sang high-voltage Puccini.

And the Winans, who dropped out of last year's Grammy show when they refused to accompany a Michael Jackson segment with a dance routine they felt was too lascivious, joined the a cappella sextet Take 6 for a gospel blowout. Both groups won gospel awards.

On the television broadcast of the ceremony, one of the winners, Robert Palmer's ''Simply Irresistible,'' (best male rock vocalist) had already been turned into a soda-pop commercial, opening with the line ''How can it be permissible to compromise my principles?'' On New York television, Mr. McFerrin sang a commercial for a local radio station.

And in a speech accompanied by the event's 60-piece orchestra, Michael Greene, president of the 7,000-member National Academy of Recording Arts and Sciences, the organization that gives the Grammys, lobbied unsubtly for new legal protection of ''intellectual property,'' a term for copyright protections that music-business heads believe are threatened by new recording technologies. As always with the Grammys, music as commodity and as art tangoed throughout the ceremony.