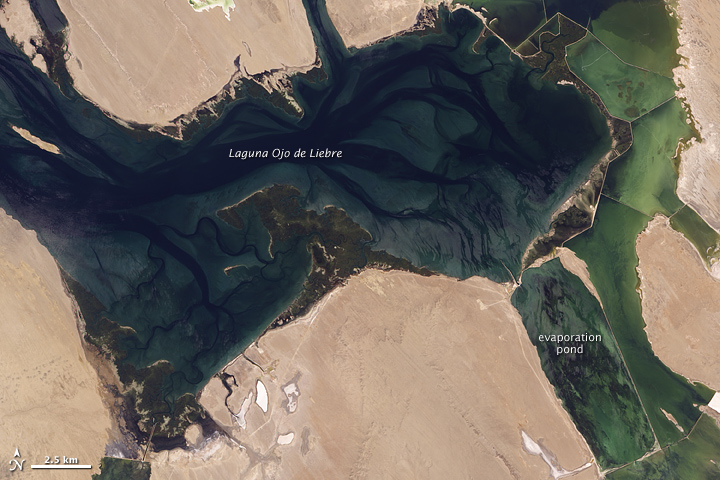 About halfway between the U.S-Mexico border and the southern tip of Baja California, facing the Pacific Ocean, lies Laguna Ojo de Liebre. Both a United Nations Educational, Scientific and Cultural Organization (UNESCO) World Heritage Site, and a major salt works, the lagoon spans diverse worlds of nature and industrialization.

The Advanced Land Imager (ALI) on NASA’s Earth Observing-1 (EO-1) satellite captured this natural-color image of the lagoon on September 18, 2009. Along the eastern edge of the image, signs of industrialization prevail. An evaporation pond associated with the salt works appears in the southeast, and human-built barriers trace thin, curving lines of white. The relatively shallow waters enclosed by these barriers appear yellow-green. To the west, the water appears blue, but reflections of sunlight produce tendrils of silvery gray throughout the lagoon. The lagoon is surrounded on three sides by sandy pink-beige beaches, some of them fringed by shoals.

Laguna Ojo de Liebre is a nesting and wintering site for harbor seals, California sea lions, northern elephant seals, blue whales and—what draws perhaps the most ecotourism—gray whales. The area also serves as a sanctuary for a variety of sea birds, and four endangered species of marine turtle. Laguna Ojo de Liebre, along with the Laguna San Ignacio to the south, was inducted into the UNESCO program in 1993.

By the early 1960s, geological studies had suggested that Laguna Ojo de Liebre began as a fringing beach or pocket beach (a small beach between two headlands) on a coastal plain that sloped gently toward the ocean when sea level was some 12 meters (40 feet) lower than it is today. Changes in the tides caused inlets to form, and sand transported by a nearby river gradually built a barrier. As sea level rose, so did the sand barrier. Today, a low barrier broken by small channels separates the inner lagoon from brine pans (salt-saturated water pits). The sandy beaches surrounding the lagoon feature shifting sand dunes roughly 12 to 15 meters (40 to 50 feet) high. View this area in EO Explorer

Acquired September 18, 2009, this true-color image of Laguna Ojo de Liebre on Baja California shows the margins of industrialized salt works in the east and a famed marine mammal wintering site in the west.

View more Images of the Day: